Susan Paterson attended Mount Allison University, receiving her Bachelor of Fine Arts in 1980. In 1981 she received an Elizabeth Greenshields grant, which enabled her to study at the Byam Shaw School of Art in London, England. She has also studied at NSCAD, the School for the Museum of Fine Arts in Boston, Academy of Realist Art and, with the support of a Nova Scotia Arts Council grant, Grand Central Atelier in New Hampshire. Her work has been featured in several publications and she has won many awards, including Second Place, Still Life, in the 15th Art Renewal Center International Salon and a Purchase Award, as well as a Fashion Week San Diego Award in the 16th ARC Salon. The winning paintings were shown at the MEAM in Barcelona and Sotheby's in New York. Her work is in numerous private, public and corporate collections. 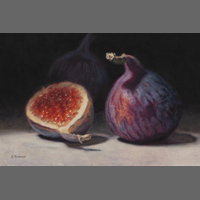